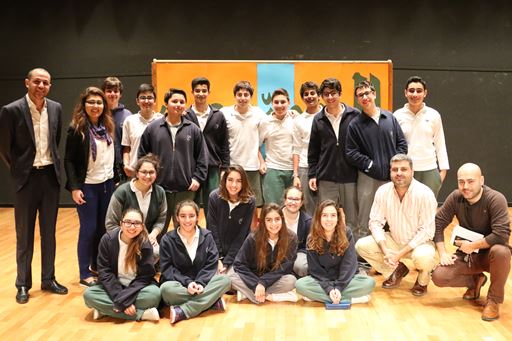 In order to instill an interest in Arabic grammar, history, geography and civics in G9 Brevet students whilst improving their performance in exams, SABIS Student Life Organization® held “Al Moumayazoun” competition in March 2015. G9 students were divided into 6 groups and the competition was partitioned into several rounds. During each round, a team was knocked out, up until two teams met in the final round on March 6, 2015. This competition helped the students strengthen their time management skills while enhancing their ability to work as an organized team. It also helped refresh the participants’ memories on essential concepts that are needed for their official exams.

"It's totally useless" we all said, before even competing in Al Moumayazoun. But we didn’t know the benefits that this competition entailed.

Al Moumayazoun is an annual competition, exclusively made for the Brevet class, which quizzes the students on their Arabic as well as Arabic Social Studies knowledge. Although we really underestimated it, we didn't fail to recognize how fun the competition actually was. Al Moumayazoun is a 3-day competition in which all students in the Brevet class are divided into six groups, and two of them would be eliminated every day. After the Finals, we all managed to have great time with each other and our teachers! We all loved it so much, that we asked to have a "scientific" version of the competition (and it was agreed upon!!).