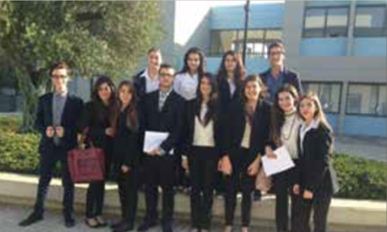 The Model United Nations final Conference for the High School took place on Saturday and Sunday March 29 and 30 respectively in the Lebanese American University in Jbeil and Beirut. As for the Middle School, it took place on March 1-2.
Building on the stellar achievements of the previous year’s High School and Middle School MUN teams, a new school club/training program was devised and implemented. The team met weekly during Student Life Periods. Topics such as research, public speaking skills, diplomatic communication, and the like were covered – with vivacious enthusiasm on the delegates’ part!
After attending several training sessions at LAU – Jbeil, SIS Adma delegates were all eager and ready to attend the final conference. Each student wrote two position papers about two different topics within the committees they are assigned to in Spain and Chile (for the High Scholl and Middle School respectively). This year, SIS Adma delegates accomplished outstanding records. Three Middle School delegates and Six High School delegates won awards and represented SABIS® Adma in their best way. After the conclusion of the final conference, an award ceremony was held at UNESCO Palace.